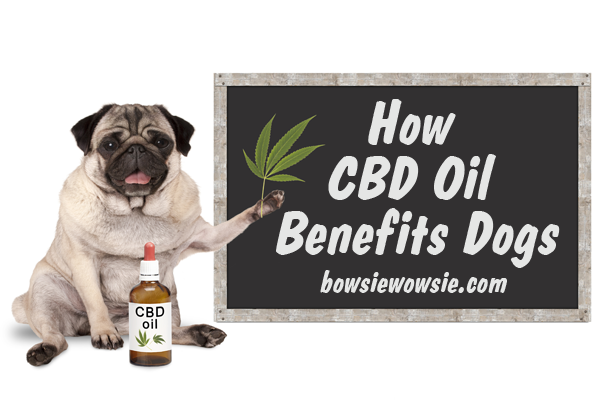 There’s been a lot of buzz lately about how CBD oil benefits dogs (and people). But what is it really, and does your dog need it? There have been many scientific studies about the benefits of CBD oil. Personally, I have had great pain relief from an Achille’s tendon rupture and our dogs have benefited from its calming effects.

The Lowdown on CBD Oil

What is CBD Oil? CBD (cannabidiol) is a compound found in cannabis and hemp. THC (tetrahydrocannabinol) can also be found in cannabis and it’s this compound that gives marijuana its psychoactive properties. Most CBD oils are just that … the beneficial CBD without the THC. And they typically come from hemp, not marijuana. In short, your dog won’t get “high” from CBD oil … he’ll get the relaxation without the intoxication. CBD Oil Reduces Anxiety in Dogs and People Does your dog suffer from separation anxiety or noise phobias? CBD has been extensively studied for its effect on stress and anxiety. In humans, it’s been found to:

CBD Can Fight Cancer CBD and other substances found in hemp and cannabis have been found to have an anti-tumor effect. CBD has even been shown to stop cancer cells from growing and increased tumor cell death. CBD helps the immune system’s killer cells to cause cancer cell death CBD kills cancer cells by blocking their ability to produce energy CBD’s anti-tumor properties slow and inhibit glioma cell growth CBD can help increase the efficacy of conventional cancer treatment CBD Can Treat Seizures And Epilepsy It’s estimated that up to 5% of dogs suffer from seizures. Most dogs with seizures are put on drugs such as phenobarbital and potassium bromide. While they may help control the seizures, they can be extremely harmful to your dog’s liver and other organs. And the drugs don’t work in all cases. CBD has been shown to work well in drug-resistant epilepsy. In one study, 7 of 8 patients with epilepsy that was resistant to drugs saw a definite improvement within 4 to 5 months of taking CBD. And a survey of children with treatment-resistant epilepsy found that 84% of the children taking CBD had a reduction in the frequency of seizures. CBD Relieves Pain The cannabinoids in CBD work so well for pain that scientists are considering it as a new class of drug for the treatment of chronic pain. Studies show CBD to be very effective for:

Click here to Order CBD oil for you or your dog now.